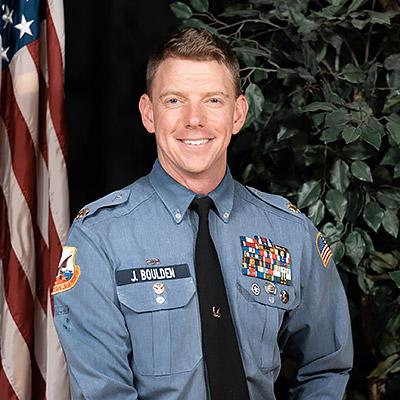 When Jesse Boulden first heard of the International ALERT Academy in 1998, he knew it was something he wanted to pursue. Ten years later, in the fall of 2008, he completed ALERT Basic Training with Unit 40, and has been with ALERT ever since. He completed 2nd Phase, EMT, and Leadership training while in the Battalion. After graduating in 2009, he spent the next few years primarily working with Basic Training, serving as a Drill Instructor, the Senior Drill Sergeant, Executive Officer, and finally the Commanding Officer of Basic Training. He has also served as ALERT’s Sergeant Major and helps instruct the Leadership & Communications course at ALERT. In 2021 he became the Commanding Officer and Director of ALERT. He has been married to his wife Katy, an elementary school teacher, since 2020.